A Brief History of our City

HOW TANAUAN GOT ITS NAME

There are two versions of the probable origin of the name of Tanauan.  One version suggests that Tanauan derived its name from the Tagalog term “tanaw” meaning “to look through (perhaps a window)”. It is believed that the name came from a fortress with a watchtower built by the Augustinian friars and natives. The watchtower allowed them to monitor incoming “champans” or boats of traders or pirates entering through the Pansipit River, Taal Lake.  From this tower, one had a clear view (tanaw) of the lake and of the vast plains and rolling hills.

On the other hand, the National Historical Commission suggests that the town was named after a shrub called “tanawa” which grew abundantly in the area and on the shores of “Lake Bonbon” (Taal Lake) during the town’s early history.

The town of Tanauan was established on its present location in 1754, having been transferred from the fringe of Taal Lake where it originally stood. It is believed that Tanauan, together with Sala, was originally founded in 1572 by the Augustinian missionaries who built a mission at the shore of a lake known then as Bonbon (now Taal). The town, however, was totally destroyed during the most impressive and catastrophic historically-recorded eruption of Taal Volcano in 1754. Together with the community of Sala, the residents of Tanauan were relocated to safer places. Tanauan moved to Bañadero, and then to its present location. Sala, on the other hand, transferred from its original site to where it is now located. Sala subsequently became a barangay of Tanauan.

Throughout history, Tanaueños have displayed characteristics of personal independence and nationalism. The town is considered the cradle of noble heroes because of the contributions to the revolutionary movement of its sons—the most notable is Apolinario Mabini, the “Brains of the Revolution”.  The City also produced political leaders like the great statesman Former Pres. Jose P. Laurel and Jose P. Laurel V, Modesto Castillo, and Nicolas Gonzales who served as governors of Batangas.

The present location of the seat of the City Government of Tanauan was established in March, 1960. Prior to this, the municipal offices occupied a concrete building in the eastern end of Mabini Avenue at the Poblacion, in front of the present Catholic Church and the Modesto Castillo Cultural Center. The old municipal building that was destroyed during World War II was reconstructed and now houses the city library, social hall, and city museum.

In 1996, Tanauan became a first-class municipality and five years after, it became a city by virtue of Republic Act 9005, otherwise known as “An Act Converting the Municipality of Tanauan, Province of Batangas into a Component City to be known as the City of Tanauan” into law by President Gloria Macapagal-Arroyo last February 2, 2001.  This was conferred through a plebiscite on March 10, 2001, which duly ratified and approved the cityhood of Tanauan.

TANAUAN AS A CITY

Tanauan, one of the oldest town in the province of Batangas became a 1st class municipality in 1996 and eventually became a city by virtue of Republic Ac 9005, otherwise known as “An Act converting the Municipality of Tanauan into a Component City to be known as the City of Tanauan, enaceted on February 2, 2001. It was signed into law by then President Gloria Macapal Arroyo, was duly ratified and approved through a plebascite held on March 10, 2001. Born of notable but humble parents, Pres. Jose P. Laurel was born in Tanauan on March 9, 1891. No other Filipino leader has had the honor of serving with distinction in all branches of the government. The late president’s ancestral house was built in 1880 and was restored in 1964. It takes in valued works, furnitures and personal effects which serve as ancestral bequest of the great statesman and political leader. And because of his influence and love for education, he was able to establish a reputable educational institution. At present, the ancestral house stands proud reminding everyone, tourists and visitors alike, that there stood a man who defend his countrymen during the Japanese period. Our noble hero and greatest Tanaueño, Apolinario Mabini, used to walk several kilometers from their home in Talaga to attend classes at Escola Pia which is the present site of Gov. Modesto Castillo Memorial and Cultural Center. It was constructed in the 1970’s and was named in his memory as the 2nd Tanaueño governor of Batangas who served for three terms. It underwent several renovations, but on 2010 it underwent total reconstruction and upgrading of facilities where seminars, meetings and some social activities are now being held. It was first built in 1881, the design was heavily influenced by Romanesque and Renaissance architecture. During World War II, it was extensively damaged and was renovated in 1948 through the efforts of Monsignor Mariño and has been restored to its former glory. Today, it continuously serves the religious needs of Tanaueños by uplifting their spiritual individuality. It is also a pilgrimage site where the faithful can come and enrich their spiritual relation to God. During Lenten Season, the church is frequented by people from various parts of the country who were joining the Visita Iglesia. It was constructed during the term of Mayor Antonio Jose L. Dimayuga (1928-1937). During World War II it was converted to a hospital that later on was transferred to the Laurel Ancestral House because of the incessant bombing. During the term of Mayor Jose Corona in 1946, it was named Puericulture Center. Then during the term of Mayor Pedro Gonzales (1951-1957), it accommodated various offices such as the Municipal Library, Treasury, Police Department, NSO, Post Office and the Registry of Deeds. In 1960, the municipal government offices were transferred to its present site. In 1996, under the term of Mayor Cesar Platon, it underwent total reconstruction, where he insinuated that the central portion be the Tanauan City Museum to house a collection of priceless memorabilia of Tanaueños to uphold Tanauan’s history and culture as well as the legacies of its people. The museum is one of the most visited landmarks in the city as it continuously inspires and educates visitors on the rich heritage of Tanauan. In 1939, the people of Talaga Tanauan donated to the Municipal Council a piece of land to be used for the Mabini Historical Marker. The donation and acceptance ceremony was solemnized on the commemoration of Mabini’s birthday on July 23, 1953. The site is also where his remains are interred after being transferred from Manila in 1957. A replica of the house of Mabini was reconstructed and was built on the very spot where the hero was born. Since then, the shrine remains an inspiration and symbol of greatness for every Filipino. Last July 23, 2014, marked another milestone in the history of the city, the commemoration of Mabini’s 150th Birth Anniversary was graced by the His Excellency Benigno Simeon Aquino III, at the same time, the new and interactive museum dedicated to the life of our hero was inaugurated. As depicted in the 1857 map found in the Philippine National Archives shows Ruinas de Tanauan, the first site of Tanauan is believed to be the present location of Talisay until 1754, then the violent eruptions submerged the whole ancient town of Tanauan. Residents of the said town moved to Sala (Bañadero). Then it settled on its present site naming it Tanauan in line with the celebration of the feast day of St. John the Evangelist, Sala then became a barrio of Tanauan. On a hill overlooking the lake, one can see ruins of a wall about 10-12 meters high that is believed to be the first stone church in Tanauan. It is said to be the oldest burial ground for priests that was established during the Japanese occupation. The peasants of Tanauan were believed to be one of the most hardworking in the Province of Batangas and produced good crops. The sugarcane tower was used by the locals and was built during the Spanish period. It is made of adobe blocks and approximately 20 ft. high. Napayong Island offers a beautiful and serene vista from the lakeshore barangays and it is considered as the tourism centerpiece of the city. Tracing its colorful past, during World War II, it served as “payong” or shelter for Tanaueños to escape the vicious treatment of Japanese troops. Today, with its rich ecotourism value, it is an ideal place for island hopping, bird watching, trekking, camping and rappelling. Sabang River has twenty one (21) springs located at Brgy. Balele, Brgy. Janopol Occidental, Brgy. Wawa and Brgy Gonzales which flow directly to Taal Lake separating the lakefront of barangays Wawa and Gonzales. The river is a precious source which was primarily used by the locals as part of their everyday living – for drinking, cleaning, washing and household water use.

The majestic Taal Lake and Volcano can be closely enjoyed in our six (6) barangays namely: Ambulong, Bañadero, Gonzales, Wawa, Boot and Maria Paz.

Sumang Magkayakap
Glutinous Rice with lihiya (lye water) is one of the famous snack and pampasalubong of Tanaueños. Uniquely named based on how it was prepared – two rice cakes tied together appearing as if they are embracing/hugging (magkayakap) each other.
Bulalo Ice Cream
Sweetened frozen dessert with a special flavor of beef shank and bone marrow soup.
Bibingkang Tanauan
Nilupak Ice Cream
Cassava flavored sweetened frozen dessert.
Previous
Next

The news about recent activities for needed peoples. 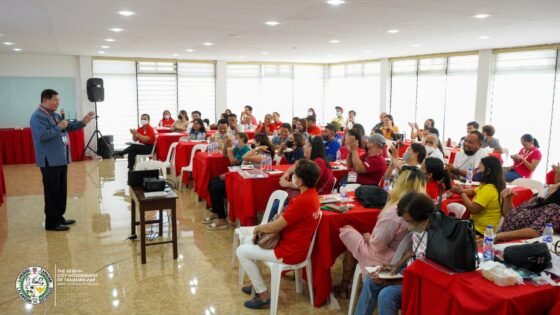